We are absolutely delighted to offer our warmest congratulations to the amazing team of volunteer Advocates at Advocacy in Barnet (AIB). AIB has just picked up its second accolade in recent months. A small but dynamic charity, AIB was recently praised by the Prime Minister and now has received the highest award possible, the Queens Award for Voluntary Service.

One of only 7 London charities chosen it was honoured thanks to its over 60 amazing volunteers who last year alone, helped nearly 7,000 people to communicate their needs and make informed choices in how they receive community or health services.
We are really thrilled that our volunteers’ commitment and energy is being recognised at such a high level. AIB receive no statutory funding and can only achieve this level of excellence through the skill base and diversity of our volunteers and our dedicated team as well as independent the sponsors.
The AIB network of older advocates for older people works to improve care standards in residential settings, day facilities, sheltered accommodation, care settings, hospitals and support older people in future care planning, avoiding and reducing debt and financial abuse, and in times of transition. 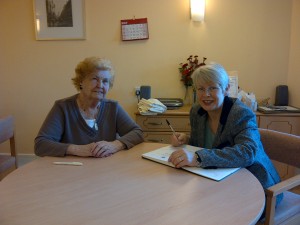 Betty Zulu is an Advocate for Older People. She says, “I give them options, and I work to produce results”. Talking to Betty, it’s clear that results come from finding the right channels to work through, and then never giving up – almost impossible for vulnerable and distressed people to do by themselves.
“Missing” letters featured when Social Services alleged that an 89 year-old woman with dementia was being beaten by her daughter. Alerted by Day Centre staff to bruising and “tension” between mother and daughter, Betty says, “I couldn’t work on allegations. I had to see the family”.
She certainly found tension. The daughter, who had given up work to look after her mother, was very distressed. She said bruising had occurred while she was helping her mother in and out of the bath. The son – a pharmacist – insisted that his mother had a medical condition causing bruising, and that a hospital had sent letters explaining this to Social Services. Social Services said they hadn’t received them and didn’t believe it.
Although the mother, with the agreement of her children, wanted to return to Tanzania, she was sent to a residential home. She hated it, and stayed only six weeks. Betty’s persistence in contacting the Head of Social Care, Occupational Therapists, family and friends, finally had a result. The consultant’s letters were found, and Social Services apologised for the accusation of abuse, which could have led to a court case.
However, her client was still not being given clearance to go to Tanzania, on the grounds that her diabetes (injections for which also cause bruises) would not be treated adequately. Betty’s response was, “Can you imagine it? Do they think there are no people with diabetes there?” Acting for her client and her family, she challenged the social workers’ decision to put her back into residential care here. Eight months after the first meeting in the Day Centre, her client returned to Tanzania, where she is much better.