In 2014 Sefton Pensioners’ Advocacy Centre (SPAC) celebrate 18 years of supporting Older People in Sefton. We celebrated by moving to a new office on the 4th Floor at the Shakespeare Centre in Southport. This is the first time the Charity has had its own office space having previously shared with Sefton CVS.

Sefton Mayor Maureen Fearn officially opened the new office and SPAC invited many of its partners and other professionals from the Sefton area to mark the day. 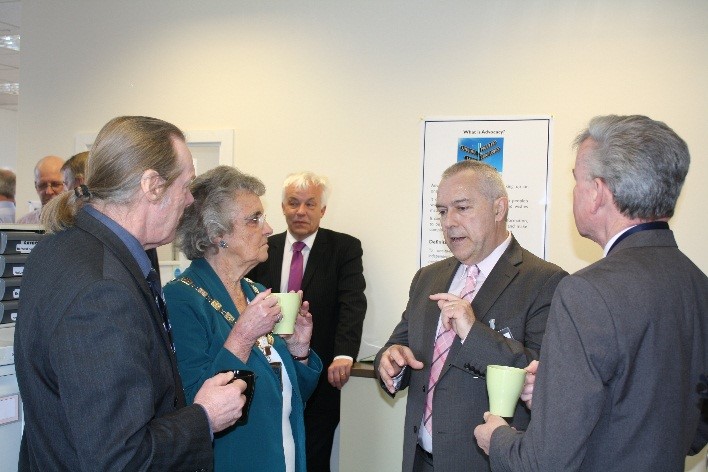 SPAC was set up in April 1996 by a group of older people who recognised that people of their age were being marginalised and not listened to and one of the founder members of the Charity Sheila Murray was there to help celebrate by cutting the cake. Sheila said “It’s amazing to see how far SPAC has come in the last 18 years. I am so proud that something I was involved with has been able to do so much for older people in the area.”

Each year the Charity helps over 450 older people in Sefton by advocating for them to make sure they understand their rights, get their views and wishes respected and their voices heard.

From its small beginnings with 1 part time member of staff and 4 Trustees/volunteers and a final first year bank balance of £13,000 SPAC has grown to 12 paid staff, 20 volunteers and a budget figure in 2014 approaching £400,000.

Partnerships have been key to SPAC achieving this milestone and alongside our long term work with NHS & Local Authority colleagues we have been very grateful to continue our partnership with OPAAL (Older People’s Advocacy Alliance) alongside Macmillan Cancer Support and Big Lottery Fund in our Cancer, Older People and Advocacy Project.

As well as our Shakespeare Centre base, we has recently opened a satellite office in Litherland at the Linacre Mission to ensure we’re more accessible to older people in South Sefton.

This is a collaborative blog contributed to by OPAAL UK and all our advocacy partners.
Join 698 other followers